Andy Votel of Finders Keepers interviews Spider King as his LP Shot To Pieces is released.

Andy Votel. As an active musician this new record delves deep into your past, mainly focusing on your DIY / Punk years, but these were not your earliest recordings right?

Spider Mike King. Not at all, I'd already done the band thing a few times. My first group was one of Manchester's first psychedelic bands called Jacko Ogg And The Head People, heavily influenced by Zappa & Beefheart (complete with home-made oil wheels) after which I started a band with Martin Hannett (Pivotal manchester experimental producer) which was effectively the Spider King Band Mk1. It was Martin's first ever group and he used to play bass with his back to the audience, those are my first ever recordings made by Martin in a makeshift home studio, this is quite some time before the DIY phrase even existed. One version of the band included Steve Hopkins and arguably formed the basis for the Invisible Girls (who made music for Nico and John Cooper Clarke). We would mainly play in Manchester and Liverpool and supported Hawkwind. I then got heavily influenced by Bowie and formed the band Spider Jive which included members of 10cc and Mike And The Mechanics, we recorded some prog-funk demos at Strawberry Studios for CBS but an accident with a smoke machine at a showcase scuppered our record deal. After this Manchester music started to become a bit more self-sufficient. 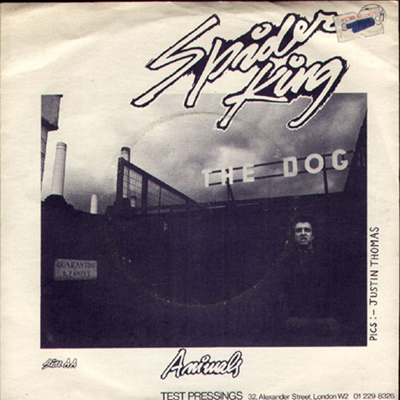 AV. Was it this climate that drew you to DIY, punk and synthpop?

SMK. To be honest I never tried to fit into any pigeonhole. These genre names didn't exist back then anyway. Punk was big in Manchester but you could say there were a lot of musicians that were over qualified for the three-chord stuff that was coming form London, that's probably what post-punk came to represent. The term DIY was just a natural disposition. People like Martin Hannett and Tosh Ryan had already set-up self-help artist collectives like Music Force and then came labels like Rabid and Absurd. I recorded tracks lIke Animals and C.I.A. with Tony Roberts in front rooms and make-shift studios using borrowed gear and what might have been the only synth (A Sequential Circuits Pro One) in a 50 mile radius. Tony would work with bands like Naffi Sandwich and John Cooper Clarke and was mates with John Scott from Gerry And The Holograms so there was a great air of experimentation around. But on the other hand I also had a foot in the Blackhill Management camp who liked my songwriting and my funk-rock persona, they were set-up by Pink Floyd and managed Gong, Ian Dury and The Clash so I was able to snatch some time in good studios which had top equipment like Fairlights and Moogs. I was also in a band called The Sirons and we released one EP on a one-off label called Pulp Plastic without even thinking too much about it. Manchester was a great place for these opportunities but it thrived on spontaneity and living-in-the-moment. Until Factory Records came along a lot of this era remains undocumented.

AV. Do you think that's what drew Nico (Velvet Underground) to Manchester?

SMK. Probably. When Martin Hannett and myself started out we were heavily influenced by Syd Barrett and The Velvet Underground (you can hear it in our early recordings) It was quite unbelievable that 15 years later i'd be playing guitar for Nico and managed by Pink Floyd's team. Even though i never released an album we were all consistently busy and playing live. 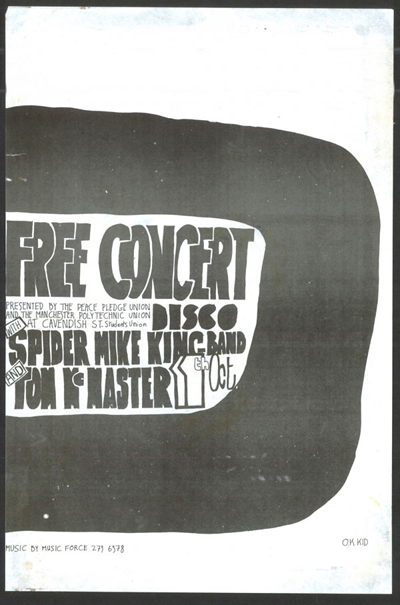 AV. I heard a rumour that you once blasted AC/DC off stage?

SMK. Ha, ha. Well that's a slight exaggeration. I think it was their first ever Manchester gig and they brought a huge rig with them and nobody knew what to expect. I had been experimenting with various guitar pedals and electro-acoustic noise / feed back etc and was asked to support them last minute for a fiver. I basically went on stage solo and plugged straight into there massive amp and improvised for as long as the crowd could stand it. Even ACDC's roadies has tinnitus.

AV. Is Shot To Pieces the album you had always planned to release?

SMK. I don't think there will ever be a definitive Spider King album, I was a bit of a workaholic and have had many personas. In all honesty its like a big jigsaw puzzle and without Finders Keepers it would have been almost impossible to see the full picture. There were so many loose ends and lost studio sessions from different eras and different musicians. It took a lot of detective work and repair work. Andy at Finders Keepers was able to stand back and find a link between a lot of disparate recordings but I'm sure there are plenty more musical skeletons in the closet ready to come back and haunt me.